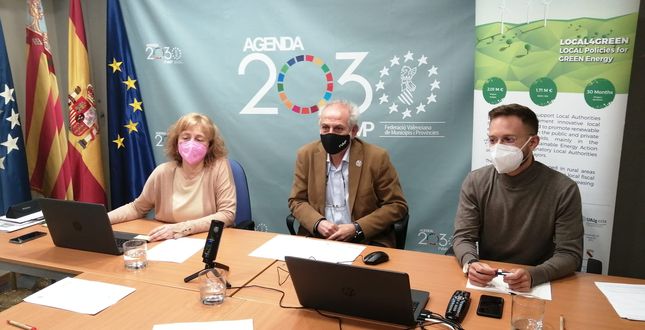 The municipalities of Altea, Pedreguer and Quart de Poblet have explained their experience in LOCAL4GREEN, designing and implementating green fiscal policies

We begin to work with municipalities to implement innovative local fiscal policies that increase the share of renewable energy in our towns and cities. This is the objective of the European project LOCAL4GREEN PLUS, in the framework of the Interreg MED Programme and co-financed by the ERDF.

On 21 April 2021, FVMP and MUSOL, have started to work with the Spanish pilot municipalities. In this first session, the municipalities of Altea, Pedreguer and Quart de Poblet, which participated in the previous LOCAL4GREEN, have explained their experience in the design and implementation of fiscal policies to promote the use of renewable energies at the local level.

The session has started with the welcome from Vicent Gil, General Secretary of FVMP, the Lead Partner of the project, and Mª Dolores Miralles, on behalf of the MUSOL Foundation, the partner that will be in charge of the training and advising to pilot municipalities, from March 2021 until June 2022.

In this first session, Yolanda Nicolau, LOCAL4GREEN PLUS Coordinator, explained both the background and objectives of the project and the next actions to develop. Later, Rafael García, President of MUSOL, has pointed out the legal bases to implement fees, taxes and other local fiscal revenues to promote the use of renewable energy sources. In addition, Francesco Filippi, Projects Manager of MUSOL Foundation, has also presented the fiscal policies implemented by municipalities in other Mediterranean countries that, despite differences in legal frameworks, can be inspiring.

On the other hand, Sergi Ferrrús, Mayor of Pedreguer municipality, María Antonia Laviós, European Projects and Participation Councilor of Altea municipality, and José Llavata, Clerk of Quart de Poblet municipality, have been in charge of transferring their knowledge and experience in the implementation of green fiscal policies.

Between 2016 and 2019, within the framework of LOCAL4GREEN, these three city councils designed tax incentives and other modifications on fees, taxes and other local fiscal revenues to encourage the use of renewable energy sources.

LOCAL4GREEN PLUS will work with pilot municipalities from their five partner countries: Cyprus, Greece, Italy, Spain and Portugal.