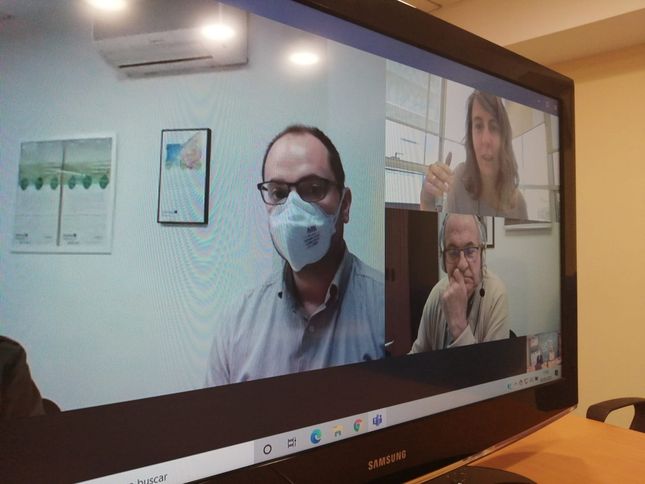 It is one of the conclusions of the meeting between LOCAL4GREEN PLUS Spanish partners and Celsa Monrós, Director General of Climate Change

The LOCAL4GREEN PLUS Project, aimed at promoting fiscal policies to increase the use of renewable energies, will serve to nurture the future Law on Climate Change and Ecological Transition of "Generalitat Valenciana", the Valencian Regional Government. It is one of the conclusions of today's meeting between the LOCAL4GREEN PLUS Spanish partners, FVMP and MUSOL, and Celsa Monrós, Director General of Climate Change. This department included in the Regional Ministry of Agriculture, Rural Development, Climate Emergency and Ecological Transition, is one of the associated partners of LOCAL4GREEN PLUS, Project in the framework of Interreg MED Programe, cofinanced by ERDF.

Gonzalo Albir and Yolanda Nicolau, from the Valencian Federation of Municipalities and Provinces (FVMP), and Rafael García and Francesco Filippi, from the MUSOL Foundation, have also participated in the online meeting.

"It is very interesting for us to participate in European projects like this, because they are tools that serve to learn what is being done and how in other regions of Europe, to know what is working and what is not," Celsa Monrós said. She has also stressed the importance of the next regulatory instrument as a roadmap for achieving carbon neutrality by 2050 and increasing resilience in Valencian territory to the impacts of climate change. The Director General has stressed the need to work aligned with local entities, as the law marks certain obligations on municipalities and on productive sectors in matters such as energy or land management. For this reason, she has expressed the interest of the "Generalitat Valenciana" in exploring the finalist green fiscal policies and its municipal impact.

FVMP and MUSOL have engaged to assess, revise and comment on the proposed law, which is currently in the period of allegations and awaiting discussion in the Courts. Both entities have already participated in the previous LOCAL4GREEN Project (2016-2019), recognized as good practice by Interreg MED Programme, which has created a useful green fiscal policy handbook to nurture such public policies. In addition, in this new phase, LOCAL4GREEN PLUS incorporates the regional pillar.

In the working session, other possible ways of collaboration of the Directorate-General in the Project have also been pointed, such as the organization of briefings for local administrations and the development of practical guides on the implementation of these taxes and fees at the municipal level.