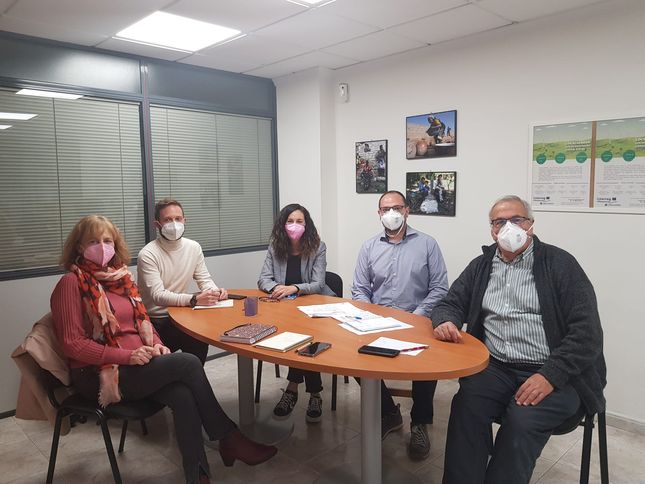 MUSOL and FVMP meet with City Councils to carry out the first training sessions to the Spanish pilot municipalities regarding local fiscal policies to promote renewable energy sources.

The Mayor, Rafaela Aliaga, and the town clerk, Jesús Montolio, express their interest in participating in European projects, especially in LOCAL4GREEN PLUS Project that will support them in the energy transition process. They tell us that they have already done steps in this sense, modifying some fiscal ordinances to include green incentives, like the Property Tax and the Vehicle Tax.

MUSOL proposes the modification of other fiscal policies related to the Construction Tax, the Economic Activities Tax and some fees, highlighting that the Project not only promotes the energy transition but also aims to sensitize citizens.

FVMP offers their support both in the framework of LOCAL4GREEN PLUS Project, and from the Service "Pont a Europa", a public guidance service on European projects of FVMP and Valencian Government.

José Antonio Amat, Finance Councilor, and Aniceto Pérez, Managing director, explain the elaboration of the Strategic Plan Elda 2030 and their commitment with the compliance of SDGs. Regarding green fiscal policies, they inform that the municipality has already carried out some modification in Construction Tax, and they intend to implement more green incentives within LOCAL4GREEN PLUS.

MUSOL proposes the modification of other fiscal ordinances related to Property Tax and some municipal fees, with the possibility to incorporate other green fiscal measures appropriate for Elda municipality, that will be discussed in future meetings.

FVMP, as LOCAL4GREEN PLUS project coordinator, thanks the participation and involvement of Elda municipality within the project.

The municipality is very interested in a modification of the Property tax and the Economic Activities tax to promote renewable energy sources. LOCAL4GREEN PLUS experts will focus on these taxes, in order to advice the municipality and implement soon new green incentives, awarding the taxpayers more committed with the sustainability.

MUSOL and FVMP will support the City Council during all the process of implementation of the local green fiscal policies.

LOCAL4GREEN PLUS experts explain to the Mayor, the town clerk and the staff of the local development municipal office, the fiscal incentives proposed by the Project for the taxpayers such the Property tax, the Economic Activities tax and the Construction tax.

Once the doubts regarding the legal feasibility of the proposed fiscal policies are clarified, the Mayor highlights that the promotion of the renewable energy sources is a priority of the municipality and he shows his interest in analyzing soon the LOCAL4GREEN PLUS green fiscal policies, to make possible a prompt decision regarding their adoption in order to benefit the inhabitants of Montuïri in 2022.

In the meeting, Ana Bertomeu, Economic Services technical and María Teresa Pérez Conejero, Ecological Transition and Environment Councilor, explain that the municipality of Denia has already implemented some fiscal incentives in the Property tax, Vehicle tax and Construction tax, and their intention is to expand these incentives and implement new ones in other taxes and fees.

MUSOL proposes Denia some green incentives to be included in Property tax, Economic Activities tax, Construction tax and in some fees such building permit or occupancy terraces fee.

The Ecological Transition and Environment Councilor, Mª Teresa Pérez, explains that they are working to reach the energy transition, but sometimes it is a complicated path, with slow changes, therefore she considers very important to raise awareness among citizens.

FVMP and MUSOL offer their support to Denia City Council for the modification of the fiscal ordinances and the inclusion of new green fiscal policies, as well as thank their participation and involvement in the Project.

MUSOL and FVMP meet with the Mayor and technical staff of Albalat dels Sorells City Council to talk about green taxation in the framework of LOCAL4GREEN PLUS Project.

After MUSOL explains the different fiscal policies implemented in the pilot municipalities of LOCAL4GREEN, the Mayor shows interest in the incentives applied in the Construction tax and the Urban Land Value Increase tax.

Through the technical support of the Project, we will send to the City Council the ordinances models where the different fiscal incentives are collected, both in taxes and fees, that can be interesting for Albalat dels Sorells, in order to work later their possible implementation in the municipality that will be discussed in next sessions.

From Meliana City Council, Josep Riera - Mayor, Rafael Comeche - European Projects Councilor, and two technical staff: Mª José Bayarri and José Vicente Orts, attend the meeting. They tell us that have started the path to green incentives, setting a bonus on Property tax, and they are studying a modification in the Waste fee to promote the recycling in their municipality.

From MUSOL, it is proposed the modification of other municipal taxes and fees, such as Construction tax, Economic Activities tax and Terrace Occupancy fee, to include a reduction for the taxpayers that use renewable energy sources. Also, Project experts requests the City Council their ideas to incentivize fiscal policies, to be studied and discussed in future meetings.